Closed transactions for upper-end real estate in Bozeman in the 1st quarter of 2016 softened.

The market, though, is picking back up, with March yielding a number of pending buy-sell contracts.

Mike and Sally, of SU PLATINUM PROPERTIES,  think that this year’s 100th Anniversary of National Parks will bring many potential buyers to Bozeman and the market will continue a steady rise. This market report covers SU PLATINUM PROPERTIES target market, which is properties priced $500,000 and above in MLS Areas 1 & 2.  MLS Areas 1 & 2 encompass a big circle stretching from the mouth of Gallatin Canyon on the south west corner to Four Corners, then north to Springhill (not Belgrade), into Bridger Canyon and Jackson Creek, over 1-90 to Trail Creek, and from Livingston Pass along the Gallatin Range back to Gallatin Canyon.

Closed transactions for the 1st quarter 2016 totaled $20,027,387, which is 95% OF THE LIST PRICE of $21,130,537. The Days on Market (DOM) AVERAGED ONLY 95 DAYS, while DOM for the current listed properties average 274. What this tells us is that properties coming on to the market that are priced right and have either what a buyer is seeking or “potential,” sell very quickly while homes that are conceived as over priced or requiring too much work languish.

Of the homes sold, 24 of the 27 closed at under $1 Million. The highest recorded sale is  $1,700,000 paid for a residence in the historic district of Downtown Bozeman sits on a corner lot comprised of 12 city lots. This sale is also the highest priced paid, $716.39 per square foot. The 27 recorded sales for the quarter AVERAGED $226.59 PER SQFT.

Area 1, which is Downtown Bozeman and surrounding neighborhoods with city sewer and water services, had 12 closings, 10 of which were priced in the $500,000 to $750,000 range. This continues the trend of 2015 in which Area 1 enjoys the highest number of transactions.

in Bozeman and are purchasing their first home or trading up.

The Northside of Bozeman had 5 closings, with 2 of them for properties $1 Million to $1.6 Million (which is actually a development property). There were 2 closings each in Bridger Canyon, the Southside, and Four Corners. The highest recorded sale in Bridger Canyon was $797,000 for a home on 39 acres that had been on the market for 471 days.

There are 157 LISTINGS priced $500,000 and above, which is a 9.3% DECLINE from the 173 listings at the end of the 1st quarter last year. At the beginning of 2016, there were 169 listings, a dozen more than what is currently on the market. This is noteworthy in that this is the time of year when homes generally come on the market. Both at the close of 2015 and the end of this 1st quarter, 100 of the homes listed are priced under $1 Million, which today represents 64% of listings. Bozeman City, Area 1, has a majority of the listings with 49 properties. Bridger Canyon, Southside and Northside are fairly evenly distributed with between 30 and 32 each. 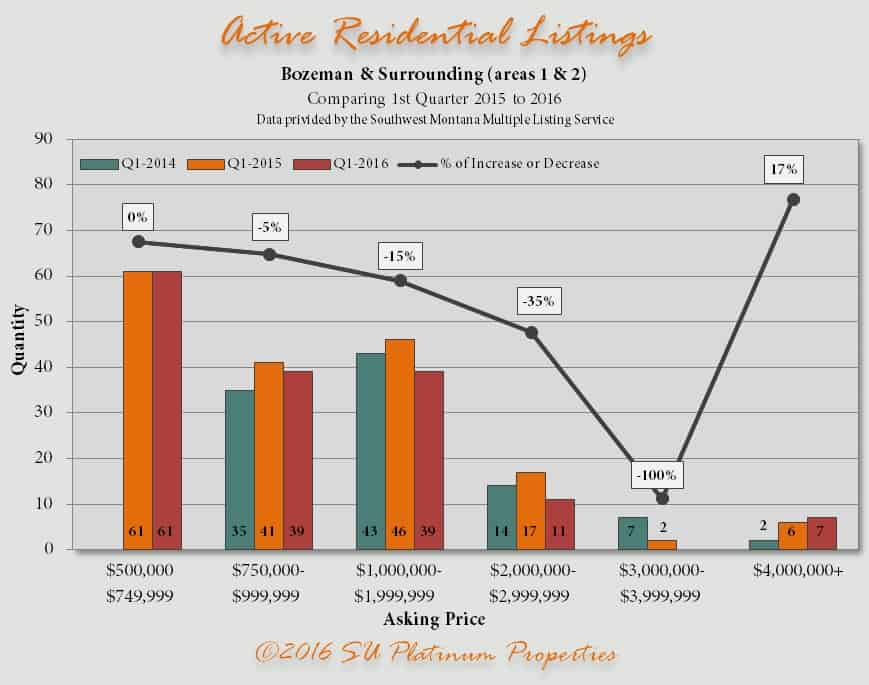 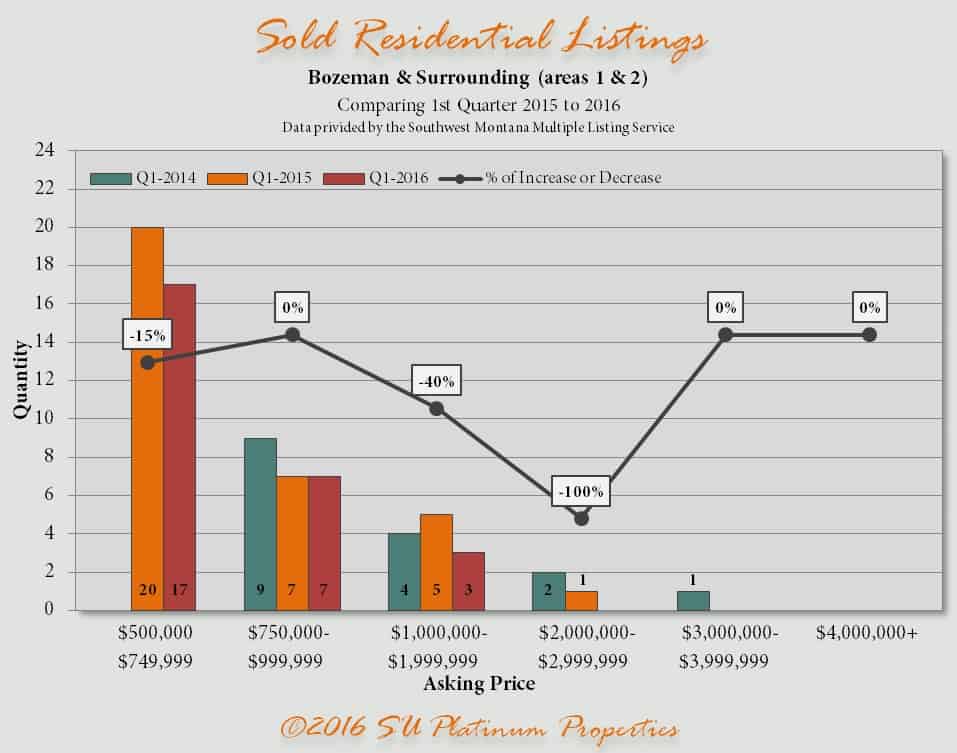 The 9 CLOSED TRANSACTIONS totaled $2,462,000 and averaged 137 DOM. The average price paid per acre was $18,225 with a 5 acre tract in the Buena Vista subdivision in Springhill averaging $48,133 an acre and the highest recorded sale being a 20 acre tract in Deer Creek that sold for $393,000. Both of these parcels have development potential. Of the 9 sales, 3 were in Gallatin Gateway, 2 in Trail Creek and Northside, and 1 each in the Southside and Four Corners.

The 121 current listings include a development parcel with an asking price of $150,000 an acre. 18 of the listings are for parcels asking $50,000 or more an acre. Bridger Canyon has 34 current listings, the Northside has 31, and the rest are fairly evenly distributed across the valley other than Area 1, which has only 1 5 acre tract listed. There is a 1,166 acre parcel for sale in Four Corners. The average DOM is 366 and the total asking price for land listings is currently just under $100 Million. 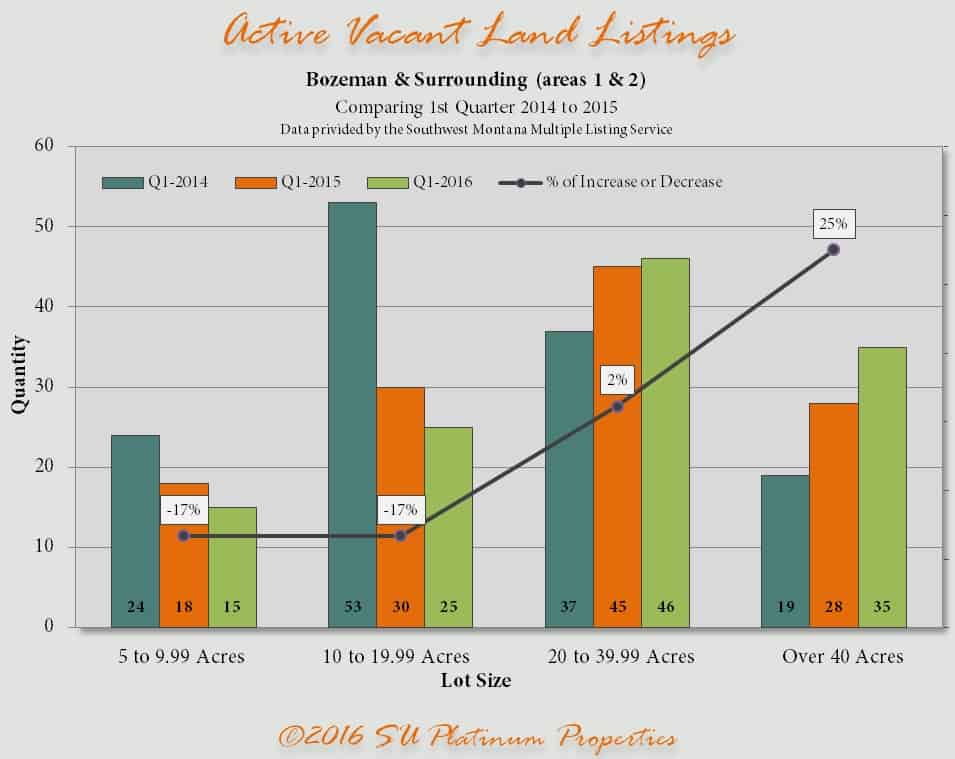 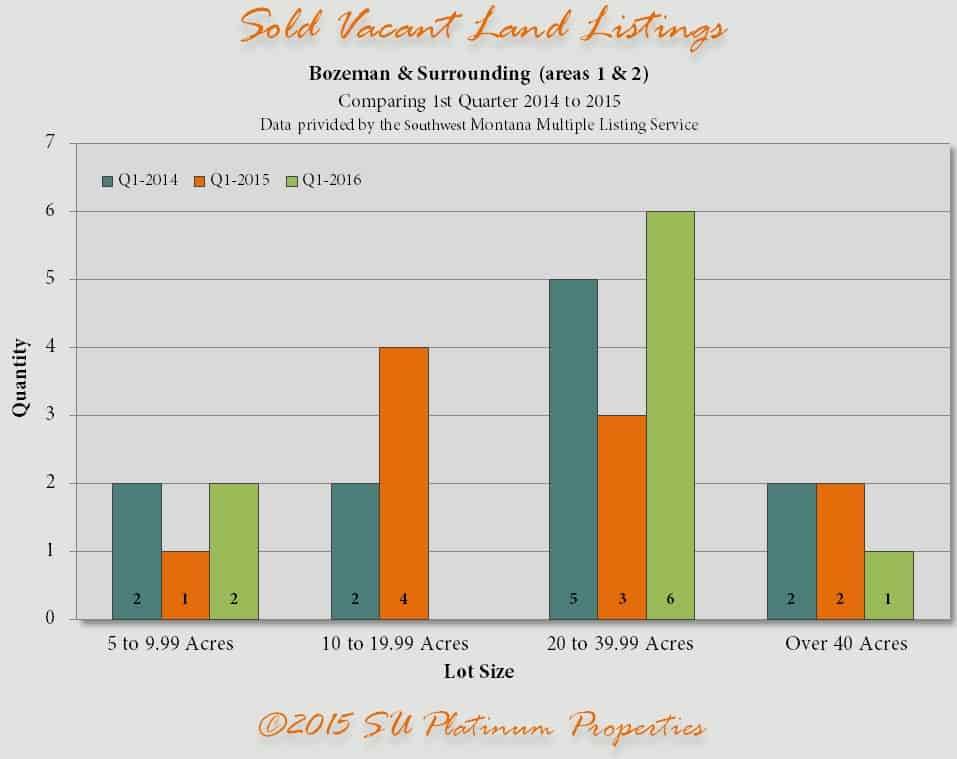 Please call us with any questions, comments, or real estate needs. We are focused on YOU.