Bozeman, Montana – While the technical term is “mobile food vendor,” most people know the unique and colorful vans, buses, and trailers circulating on Bozeman’s streets as “food trucks.” The practice of serving meals from vehicles is a growing trend around the country and the market has quickly adapted.

Food trucks offer new choices to hungry folks who are looking for a different dining experience. Perhaps it’s because of time constraints, or location, or the need to keep a first date casual yet intriguing that food trucks exist in their own niche of the restaurant market. Whatever the reason, they’re everywhere. And by everywhere, I mean they drive around and can literally sell a hamburger at a stoplight. It’s a genius idea and a path to business ownership without the massive overhead that’s usually required. And as I came to discover in my “research” for this article, food truck owners care about more than money. They want to provide amazing and original food at reasonable prices. And my official verdict is that on the whole, they’ve succeeded.

So, without further ado, and in an order that conforms only to my subjective feelings, I have listed the four objectively best food trucks in Bozeman, plus the only mobile coffee vendor in town. And while some of these trucks are truly mobile, others have a fixed location and I’ve listed the most likely address for each.

While I couldn’t decide whether the word “heap” before the word “burger” was enticing or nauseating, I discovered that it’s actually the last name of the owners, Jonathan and Athlene Heap, and is not referring to any aesthetic description of the burgers themselves. This was a happy realization for me, but given that it’s located in the parking lot of a hardware store and caters to hard-working and hungry builder-folk, it probably sends the right message at least 70% of the time. 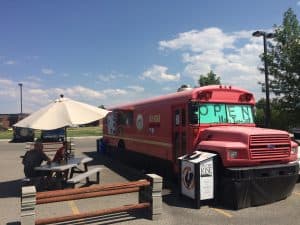 Joking aside, Heap Burger was my favorite food truck before I started this article, and I singled them out as my first data point of dietary science. When I arrived, classic rock was pumping from the outdoor speaker and I immediately appreciated that I could hum along to “Manic Monday” while choosing from a menu of burger options that I would legitimately describe as exotic.

With Athlene’s help, I decided upon “The Asian Persuasion,” and settled in to enjoy a burger that took Jonathan 50 tries to perfect. When he told me that, my surprise must have shown.

“They don’t all take that long. Some of them, I got on the first try.”

Jonathan is a chef who has utilized his skills to create unique hamburgers out of an aged red school bus, and as one of the oldest and most successful trucks in town, it’s clear that the Heaps are doing something right.

Rendezvous is the only food truck I visited with a picket fence. Based on that and the generous, shaded seating, I give it the best environment award, easily surpassing of all the trucks I visited. Sitting permanently on North Wallace Street, across from Wild Crumb, Rendezvous serves mostly crepes but apparently on Friday (Fiesta Friday), beef tongue tacos are also a thing. 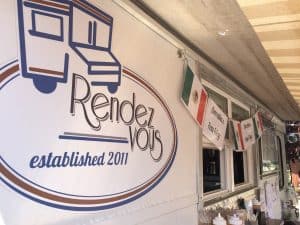 I wanted to order those tacos, but in the name of journalistic integrity, I went with what they described as “the customer favorite.” I ordered “The Ridge” crepe, which is filled with their house-smoked pork, breakfast potatoes, and cheddar cheese, and it was indeed an incredible breakfast. Like Heap Burger, Rendezvous plays music, but of a more European variety.

Ah, I just realized how it all fits together. French title, European music, crepes. It all makes sense now. Yet somehow, the picket fence surrounding a giant barbeque grill pulls it together and keeps the American dream alive throughout the dining experience.

Rendezvous is a great place to enjoy a summer morning breakfast at the base of the Bridger Mountains that will match the quality of any brick-and-mortar establishment.

Blue Smoke BBQ gets the cheat code award for the fact that it sits in the parking lot of Bozeman Brewing Company and the owner, Justin, insists that you go inside to get a beer. And then they bring you the food. Even though I didn’t really want a beer when I showed up (I was doing important research) I realized that enjoying carefully crafted barbeque with carefully crafted beer was pretty much the perfect sales pitch. And the platter of BBQ Brisket with a side of tangy coleslaw was large enough that it took two beers to do it justice.

As it states on their website, Blue Smoke has almost two decades of experience, and is the result of continued experimentation and barbeque-apprenticeship, which apparently exists. The passion pays off, because it was easily the best barbeque I’ve had in Bozeman. I recommend visiting with a big appetite and some time to relax and unwind in the Bozeman Brewery. One, because it’s an awesome thing to do. And two, because there’s nowhere else to sit.

We can all agree that anytime a taco is being consumed, a victory of sorts has occurred. There are many other things to eat, but choosing tacos always implies, at the very least, a shining and glorious moment popping against the grey bleh of an otherwise 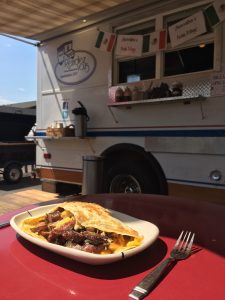 And this being the case, I chose to feature Victory Taco partially because of the narrative accuracy of their name. Every visit is automatically a victory. But beyond that, the tacos are amazing.

I’ve already used the word “exotic,” so I will describe the non-traditional twists of Victory’s tacos as “deliciously quirky.” Titles like “The Kim Jong,” “The Piggly Wiggly,” and “Ferdinand the Bull” stick in the mind and I have legitimately had moments of thinking to myself that “I could really go for a Kim Jong right now…” While I’m sure President Trump often has similar thoughts, and perhaps they will emerge in tweet form soon, Victory Taco offers the safe and healthy way to consume the great leader.

Oh, and they serve ice cream too. Total victory achieved. 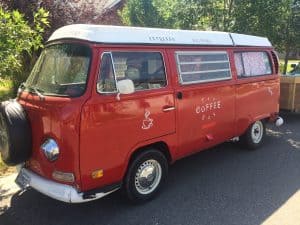 I’ve had the privilege of being a taste-tester for the newly opened Montana Coffee Bus, and besides being biased, I can wholly endorse them on the basis that they serve delicious, healthy drinks and are the only mobile coffee vendor in town.

Supplied by Treeline Coffee and Townshend’s Teahouse, the Montana Coffee Bus specializes in unique drinks not found in most established coffee shops. Bus-made organic syrups, turmeric and mate’ lattes, Bulletproof Coffee (filled with healthy fats for balanced brain function and sustained caffeine absorption) and all the normal coffee options you would expect make up a versatile menu. Additionally, the Montana Coffee Bus delivers and can bring your sweet, sweet stimulants directly to your doorstep.